Manners and the modern workplace 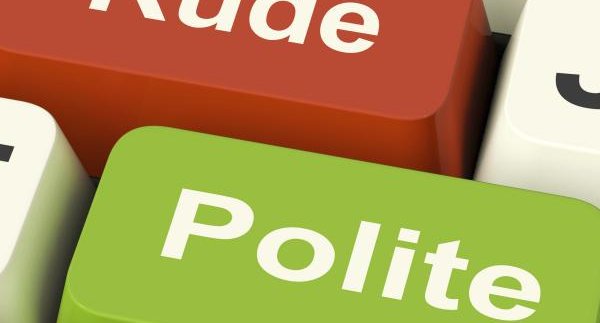 Once upon a time, things were a bit more straight forward when it came to manners and the workplace. The manners that our parents instilled in us prevailed, and we learnt to take our cues at work from the senior and the successful. We learnt about a term called “professionalism”, and generally it was applied and understood by all in a corporate environment. Things were simpler then.

However, the waters have become muddied in the digital world and suddenly etiquette, manners and professionalism seem to be progressively optional. Well, for some. Not for all. And the separation between those who apply etiquette and those who don’t often strongly correlates with long term success and reputation. Without exception, in my experience the most impressive and successful executives, board members and thought leaders that I have met have been humble, gracious and polite. Coincidence? I think not.

Early in my career, I had the great fortune to work for a CEO who was tough, but fair. Under his tutelage, I learnt that it was important to answer the phone promptly, reply to all emails, and return phone calls – regardless of who was ringing. His philosophy was pretty straight forward and made a lot of sense. You treated others as you would like to be treated and always remembered that every interaction could be with a potential customer. This innate understanding of the importance of maximising our brand as customer centric was pervasive throughout the organisation.

Strangely, in a time when managing one’s own brand is deemed more critical than ever, some of these ideals have been abandoned by many – and not just the younger generations that are entering the workforce. In a time when many hide behind their screens, the words that are written are often without care and it can be all too easy to simply delete or ignore contact from another. The consequences are rarely instantaneous; however, the brand damage can be significant – both on a company and personal level.

There are always two sides to every coin – and just as the digital age has ushered in an increased lack of sensitivity toward others, it has also introduced many mechanisms for spreading news about poor behaviour. In fact, now more than ever, it is incredibly easy for your brand to be sullied by poor feedback. Many, myself included, have long memories. That person that you ignored or were rude to today, could very well be a key decision maker in your future. Jobs come and go, but your reputation is forever.

So, if you are interested in creating a strong personal brand, or building your organisation’s reputation, what are some of the basics in business etiquette for the 21st century? These are some of my particular favourites:

I totally understand that you are inundated with emails, text messages, social media messages and phone calls. This absolutely one of the challenges of the modern world and how we work. However, you need to work out a system to respond to these – and simply ignoring them is not a particularly effective approach. Granted, some of those messages are spam and these are generally easy to spot. However, for the genuine messages, there is a person associated with that message and that person will judge you on your response, or lack thereof.

Take for example one of my experiences. I had contacted a well-known CEO, whom I admired greatly and I was interested to learn more about his success. Over the course of several emails, we agreed to catch up. Without warning, he stopped responding. Perhaps he was inundated with too many emails and just didn’t have the time? Perhaps I was no longer someone he wished to invest time in? Regardless of the excuse, the impact was the same. I went from admiration to feeling insulted. In an amusing twist of fate, I now work with the board of an organisation which purchases his software products.

In case you are not aware, using CAPS in a message is effectively the same as yelling at the recipient. So, unless that is your intention, best to stick to lower case!

Particularly with emails, you should make sure that your first email in the conversation includes a salutation and concludes with a sign off. One sentence directives (or even worse, one word directives) are never appropriate as a starting point.

I worked for a short period of time with an “executive” (and I use that term reluctantly) who would literally send one word emails or one sentence emails. There was no please, no thank you, no greeting and no sign off. Not surprisingly, he was incredibly unpopular and seemed confused as to why others did not want to work with him. His emails were often directives and almost universally, they were considered to be highly objectionable.  Not exactly a way to create harmony and engagement! Suffice to say he didn’t last for long and very few of us would ever choose to work with him again, in any capacity.

Remember to say “please” and “thank you” – to everyone

For some reason, this most basic of manners often seems to get lost in the corporate world. It doesn’t take a lot of time to remember to include these words – and the impact can be significant!  Consistency is also important here and you should use these words without discrimination. It is just as important to say please and thank you to the cleaner as it is with the Chair of the Board.

Put the phone down

Okay, I know that it is hard to leave your phone alone without separation anxiety kicking in. However, try to think of the other person in front of you and whether or not you are completely focused on them. If you constantly check your phone whilst in the company of another, you are effectively prioritising your phone over them. If you must have your phone close by, make sure it is on mute and place it face down on the table, so that it is not a distraction.

Remember that if you feel a need to respond immediately to every incoming text, you’ll lose more in the eyes of the person who’s in front of you than you’ll gain from the unseen people who are benefiting from your efficiency.[1]

Sometimes you will need to reschedule an appointment. Things crop up, there are emergencies and fires to be dealt with. Everyone understands that and is forgiving – the first couple of times. If you are rescheduling for the third, fourth or fifth time, you have lost goodwill and have moved into “rude” territory.  In this scenario, you are indicating that every other priority is more important than that meeting and the recipient truly cannot help but feel offended.

I had the wonderful opportunity to work with an incredible Executive Assistant, who taught me a lot and kept me exceptionally well organised. She had a fantastic system where she would let me reschedule an appointment up to two times (she even colour coded my diary to indicate any rescheduled appointments). After the second reschedule, she would encourage me to call the person directly to apologise. She would not let me reschedule a third time. Period. I am grateful for her assistance and for keeping my empathy and ego in check.

I recently had the opportunity to experience the other side. A senior executive and his assistant rescheduled our appointment four times. On the fourth time, I simply declined and wished them well. To be honest, I realised that I was not that important to them and I was starting to feel incredibly uneasy with their culture. It was liberating for me to walk away – however, I am unlikely to remember that organisation in a positive light.

Talk directly to the person about a problem, not about them to others

This is probably one of my biggest no nos. If you have a problem with someone and feel the need to talk about it, have the courage to talk to the person – not every other willing gossip who is prepared to listen and join in. This is cowardly behaviour and certainly not the sign of a great leader. Courageous conversations are important and the only way to meaningfully address your concerns is to talk directly to the person involved. If you are unable to do that, then try exercising restraint and keep your opinions to yourself.

It is also important to remember that most individuals engage in their work with good faith and good intentions. So, when talking about a problem that upsets you, remember to attack the problem – not the person. Personal insults are rarely an effective method of problem solving. You are only letting yourself and your manners down and it will not go un-noticed.

Praise in public, criticise in private

This is for me, the epitome of good manners at work. Have the good grace to praise others in public, and always criticise in private. Dressing down another in front of an audience (who are often quietly wishing the floor would swallow them up) is bad form and reflects negatively on so many fronts.

That CEO who taught me about manners in the workplace, was wonderfully adept at this. We never knew if he had a favourite (although I like to think it was me!) and we never knew if someone else had done something wrong. He would never bad mouth anyone publicly and for that, he was widely respected internally and externally. And he still is, to this day.

In summary, it’s been said that good manners will open doors that the best education cannot.[2] From my experience I have found that to be true, over and over again. It is always wise to remember that the world is small, memories are long and everyone is a potential customer.